GEFYRA S.A. subscribes to the Diversity Charter of the European Commission 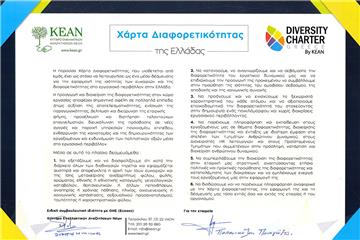 GEFYRA S.A. aligned itself with the Diversity Charter of the European Commission, thus reconfirming its commitment to the application of the principles of equal opportunities and diversity in all workplaces.

The adoption of the Diversity Charter, as is an initiative of the European Commission to encourage organizations to promote Diversity, started in Greece in 2019 and is implemented by KEAN, i.e. the Cell of Alternative Youth Activities.

In a meeting called at the head office of the Company in Halandri, Mr. Panayiotis Papanikolas, President & CEO of GEFYRA S.A. welcomed Mr. Stavros Milionis, President of KEAN and Mrs. Athina Atmatzidou.

The two Presidents signed the text of the Charter in the presence of Mr. Yannis Freris, Director of Corporate Communication & Sustainable Development GEFYRA SA.

Then, Mr. Papanikolas, addressing to Mr.Milionis, made the following statement:

“Our bridge was built thanks to the synergy of people of different backgrounds and nationalities, but also by respecting and giving priority to the role of women who held positions of responsibility on the large construction site of the Bridge.

This achievement has been drastically contributed to by the expertise in the management of complex human resources, as well as the principles of our major shareholder, namely VINCI Group, who in its manifesto verbatim proclaims:

Our culture is based on bringing together people of different backgrounds and experience.

We fight all forms of discrimination in hiring, in workplace relations and in the career paths of our employees.

We train our managers in this requirement and impress it on our suppliers and subcontractors. We commit to diversifying our supervisory staff to include more women and people of diverse origins.

Today's signing of the "Diversity Charter of the European Commission" is for us another commitment, which we voluntarily undertake, fully aware of the fact that everything we have achieved in our long corporate course is due to our commitment to daily honor our contractual and ethical obligations.”

"GEFYRA S.A. is the new member added to the Diversity Charter for Greek companies.
GEFYRA S.A., by signing the Charter confirms its commitment to the principles and values of Diversity and the healthy inclusion of executives in its business environment.

We welcome it and believe that today's signature will be the starting point for a series of synergies and actions in this direction.”

As regards the Diversity Charter of the European Commission

The Diversity Charter is promoted to every EU member state since 2004.
Many states have already started to implement and continuously strengthen the European Diversity Charter dissemination project.
Examples include France, Germany, Finland, Denmark, Germany, Belgium, Belgium, Italy, Spain and Portugal, with actions supported from the outset by leaders such as former Chancellor Angela Merkel, as well as by institutions, government bodies, ministries and business associations.