GOLD for GEFYRA at the Women Empowerment Awards 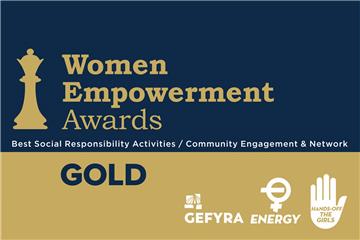 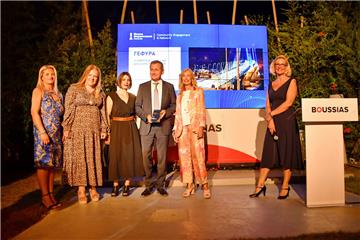 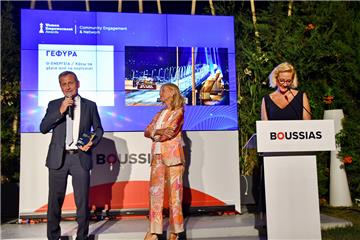 GEFYRA SA received the Golden award at the «Women Empowerment Awards» for its initiative to set up the action platform "Theta Energy" and the corporate activism campaign “HANDS-OFF THE GIRLS!”, being the best in the field of Best Social Responsibility Activities / Community Engagement & Network.

Having received the Award, Mr. Panayiotis Papanikolas, Chairman & CEO of GEFYRA S.A. made the following statement:

“As early as 2019 (even before the Greek “ME TOO” era) and on the occasion of the 15th anniversary of "Charilaos Trikoupis" Rion-Antirion Bridge, we proclaimed our intent to go beyond our corporate social responsibility and our corporate citizenship.  To that purpose, we decided to engage in corporate activism in favor of women’s rights, by setting up the action platform "Theta Energy” staffed with socially and professionally successful women of Western Greece.

Through this platform, it appeared that the long-standing relationship of closeness and synergy with the local community, its active members and their associations is renewed and continues to bear fruits.

Our aim is to further strengthen the timeless and efficient symbiosis between words and deeds, which is a corporate tradition and is not only reflected in the landscape of the Rion-Antirion Strait, but also in the bridges built between people.

People who are aware of the fact that they owe their lives to a woman".

Representatives of institutions and bodies of Western Greece that cooperate with GEFYRA for the empowerment of the social status of women also made statements regarding the award:

"For the Region of Western Greece, Charilaos Trikoupis Bridge is a symbol. However, it is not only the technical dimension that makes it a symbol, but also the social perspective of GEFYRA S.A., which constructed and exploits the Bridge. Its initiatives to defend women's rights are in line with the regional authority's strategy, while the synergy with the people of the Company strengthens our common vision and multiplies the intensity of our efforts, which is translated into actions that leave their imprint on our social reality".

President of the Women Association of Patras

"Violence against women is probably the most shameful violation of human rights in the world and cuts across all social groups and their economic status. As long as it continues, we cannot talk about equality, social peace and development. On behalf of the Women Association of Patras, I would like to express my sincere thanks to GEFYRA S.A. for the very important actions of corporate activism that it has shared with us, through the platform "Theta Energy", with its highlight so far being the workshop "WOMAN - BRIDGE OF LIFE", which we had the pleasure and honor to co-organize. The message "HANDS-OFF THE GIRLS!" empowers us by making it clear that we are not alone in the struggle for equal rights, without violence, in a sensitive society that deserves to be handed down to our children".

"The women of our region find a particularly dynamic ally in GEFYRA S.A. and the corporate activism platform "Theta Energy" that the company has set up to strengthen women's rights. It was a great honor and pleasure for me to contribute as an active citizen, as President of the Nafpaktos Moto Club and as a journalist, to the organization of the trans-regional motorcycle march "HANDS-OFF THE GIRLS!". I consider it urgent that we all together stand up for our society against those who dare and raise their hands to abuse women. The synergy of institutions and citizens with companies such as GEFYRA SA and action platforms such as the (POSITIVE - FEMININE) "Theta Energy" should be an example for the societies of other regions of the country.”

EXPLANATORY NOTE: Theta, first word of the name of “Theta Energy” platform derives from the Greek letter «Θ» (theta) which is the initial of the words “Positive/Θετική/Thetiki” and “Feminine/Θηλυκή/Thiliki”.