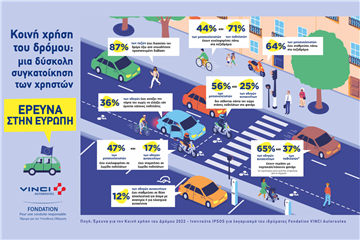 93% of road users are afraid of the risky behaviour of others.

The VINCI Autoroutes Foundation has published the results of a unique study on “Sharing the road”. Like the Baromètre de la conduite responsable (Responsible Driving Barometer), this Ipsos-conducted survey offers an overview of the behaviour of Europeans dealing with the coexistence of different modes of transport; this includes drivers of cars and motorised two-wheelers, cyclists, users of personal light electric vehicles (PLEVs)[1] and pedestrians. How do they feel while travelling? How much attention do they pay to other road users? Are they following the rules of the road? Does the use of different modes of travel have an impact on their behaviour? At a time of accelerating development of active modes of transport[2], including cycling, sharing the road – and public space in general – requires all parties to be able to adapt in order to guarantee safe and peaceful travel for all. The responses of 12,400 Europeans highlight the need to make all users aware of the need to respect others and the rules, and thus enable harmonious coexistence between the various transport modes.

2 Active modes of travel include walking and cycling.

In Europe, the regular use of active modes of transport is still a distant second to car use.

The car is, and remains, the primary mode of transportation in Europe. However, for their daily journeys, Europeans are also regular users of active modes. 66% regularly walk (76%), and 22% regularly use a bicycle (14%). Another 7% use a motorised two-wheeler (12%), and 3% a scooter or hoverboard (6%).

As far as walking is concerned, Spaniards walk the most (77%) and Belgians the least (51%).

Regardless of the mode of travel, the prospect of sharing the road creates anxiety and tension.

The diversity of modes of transport (cars, motorised two-wheelers, bicycles, PLEVs, walking) and the changes in their respective shares, in a constrained public space, makes cohabitation between the various users complex and often difficult.

A substantial majority of users report a particularly tense environment on the road.

Such fears may be linked to risky behaviour by other users. This is mentioned by 93% of them, and in particular:

Pedestrians are also heavily affected by risk-taking by other road users. For example, 90% fear that a motorist will not stop to let them pass while they are on a pedestrian crossing (92%), and 63% fear that a bicycle, scooter or hoverboard will run into them on a pavement (88%).

“The numerous risks taken and offences reported among all categories of users serve to place the most vulnerable at particular risk, and create tensions that are an unwelcome reality for all. Within a physically constrained space, respect for the rules of the road and care for others are a basic prerequisite for safe and peaceful travel. A worry-free road-sharing experience should be seen by everyone as an opportunity to exercise good citizenship and coexist harmoniously.”

Risk-taking and non-compliance with the basic rules of the road affect all categories of users and, overall, men more often than women.

Despite the fact that phone use is recognised as one of the main sources of distraction, causing many accidents, more than half of motorists, motorcyclists and pedestrians use their phone while driving or walking:

For pedestrians, failure to stop at a red light or the “red man" can be fatal, both for yourself and for other road users. Yet this offence is widely accepted by drivers, cyclists and pedestrians alike. For example:

In addition to this dangerous behaviour, which is prohibited by the highway code, tension on the roads is also linked to non-respect of spaces reserved for certain categories of users

Urban and road planning must ensure that the road is shared between the different modes of transport, and changing mobility uses call for adaptations to address new needs. However, even in a constrained space, respect for the spaces reserved for certain categories of more vulnerable users must take precedence, in order to ensure their safety. Lack of space, traffic density, safety concerns ... these are all false “good reasons” for encroaching on the spaces reserved for other road users and putting them at risk. Each type of user has its own “guilty confession”:

Does the use of different modes of transport lead to greater respect for other road users?

One of the benefits of using a variety of modes of transport is to be able to put yourself in the shoes of others, to understand their constraints and vulnerability.

65% of drivers use at least one mode of transport other than walking - motorised two-wheelers, bicycles, scooters, etc. - (69% of Greeks - 84% of Dutch and 40% of Britons). However, 77% say they are more cautious of other road users - checking blind spots, respecting cycle lanes and spaces reserved for disabled people, taking care when opening the door, etc. (86%), and 75% say they are more aware of the vulnerability of other road users (82%).

The specific characteristics of cycling

In Europe, slightly fewer women than men cycle regularly: 20% vs. 24% for men, and this difference also exists for occasional cycling: 40% for men vs. 36% for women.

The feeling of safety when cycling

The feeling of safety when cycling, which is an important factor in encouraging people to cycle, varies significantly between countries. Although on average, 82% of cyclists in Europe feel safe when travelling by bicycle (75%), this proportion drops from 96% for the Dutch to 60% for the French (36 points lower). In fact, French people feel the least safe of the 11 countries surveyed. In this respect, France also differs from the European average in that there is a clear difference between men and women: although 66% of French male cyclists feel safe when cycling, only 50% of French female cyclists feel this way (83% of men in Europe vs. 81% of women).

The use of bicycle helmets for adults is not compulsory in any of the countries covered by the survey, with the exception of Spain where it is recommended in urban areas and compulsory elsewhere. 28% of regular European cyclists frequently wear them (42%). Unsurprisingly, this proportion is highest in Spain (67%). It is lowest in the Netherlands (5%), followed by Belgium (24%).

In urban areas, misjudgements of blind spots by drivers of heavy vehicles (trucks, buses, coaches) and by cyclists very often expose them to danger, especially cyclists. As for cyclists, 46% (41%) admit that they do not know, or are not sure, whether their position allows them to be seen. A better understanding of this risk by drivers and cyclists is therefore necessary to enable all parties to adjust their behaviour to prevent this type of accident, which often has serious consequences.

To conduct the Responsible Driving Barometer survey, from 5 to 31 March 2022, Ipsos conducted an online survey of 12,400 people aged 16 and over, including 2,400 French people and at least 1,000 people in each of the 10 other countries surveyed. The representativeness of each sample is ensured by the quota method.

About the VINCI Autoroutes Foundation

Founded in February 2011, the VINCI Autoroutes Foundation is a laboratory, observatory and source of information specifically dedicated to changing driver behaviour. Primarily focused on improving road safety, it aims to promote responsible road behaviour and, in 2018, it expanded its sphere of action to include environmental and educational measures (“responsible behaviour”).