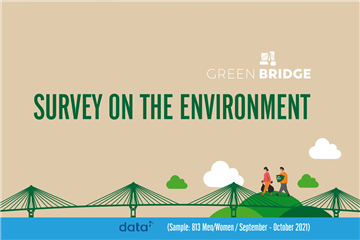 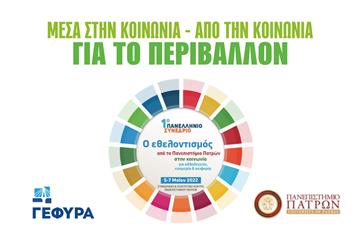 Opinion Poll on the environment in Western Greece

& Partnership between Gefyra SA and the University of Patras on volunteering

In his presentation at the 1st Pan-Hellenic Congress on “Volunteer to the serve the Community for Welfare, Solidarity and Sustainability” (5-7/5), Mr. Yannis Freris, Director of Corporate Communication & Sustainable Development, representing Gefyra SA announced a partnership between GEFYRA S.A. and the University of Patras to develop a volunteering strategy and actions.

Mr. Freris referred to the volunteering actions implemented by the Concession Company of the Rion-Antirion Bridge before the pandemic and developed the concepts of corporate citizenship and corporate activism which are the principal axes of social and environmental responsibility.

He also stated that furthering the execution of a memorandum of understanding with the University of Patras to jointly design and develop volunteering actions is a particularly promising message to increase the participation of people and in particular of young ones in the greater area, pointing out that there is a relevant agreement in principle with the Region of Western Greece.

At the same time, he presented an opinion poll conducted by DATA Consultants for the account of GEFYRA S.A., in September and October 2021 regarding the opinion of the citizens on environmental issues.

From the said poll it arises that the most important environmental issue for Western Greece is the lack of ecological culture and education (52.9%), followed by the irresponsible disposal of wastes (22.3%) and the protection of the marine environment (16%).

37.2% of the citizens said that they were willing to participate in volunteering actions, while 61% out of them clearly rejected their participation in such actions.

SURVEY ON THE ENVIRONMENT

Photo: Mr. Panagiotis Dimopoulos, Vice Rector for Research and Development (on the right), coordinator of the volunteering programs of the University of Patras with Mr. Yannis Freris, Director of Corporate Communication & Sustainable Development of GEFYRA SA, at the 1st Pan-Hellenic Congress on Volunteering.